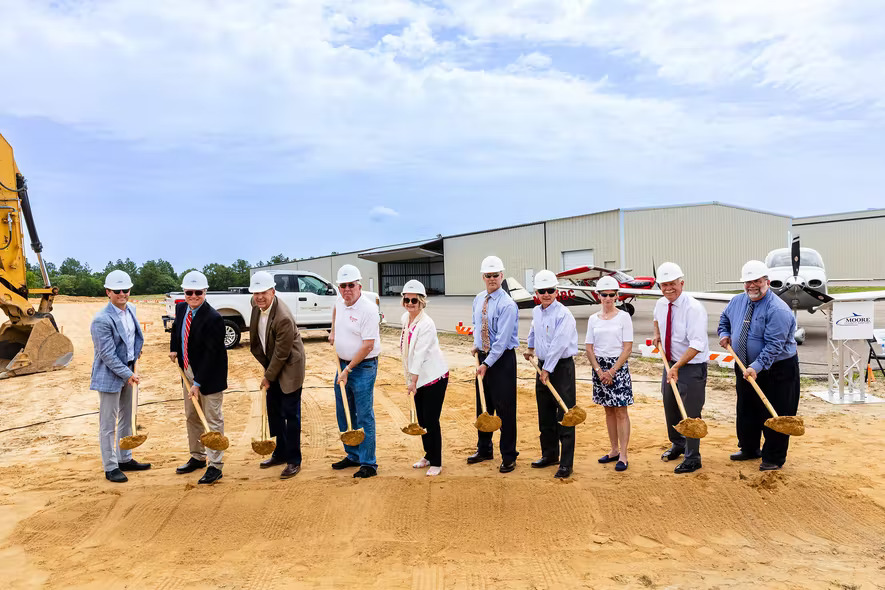 The project, recently approved by the Moore County Commissioners and Airport Authority members, will include the construction of two separate buildings containing five 60’ X 60’ hangars, 12 T-hangars, storage units and restroom facilities. The new hangars are scheduled to be completed in early 2023.

“It’s so exciting to finally be breaking ground on this airport expansion project because these hangars have been in the planning stages for years,” said Mike Jones, Chairman of the Moore County Airport Authority. “Hangars are important because a prosperous community needs to have a prosperous airport; it’s a must-have. A successful airport creates jobs and economic opportunities for everybody in Moore County.”

The hangar expansion project was designed by Talbert & Bright of Wilmington, NC, who specialize in planning and engineering for aviation solutions. The site development is being conducted by the Fred Smith Company of Raleigh, NC, and the actual hangar construction will be completed by Daniels & Daniels Construction Company of Goldsboro, NC. While the preliminary funding for the project was provided by a state grant, all the cost of construction will be funded directly by the Moore County Airport. No Moore County funds are being used for this project. Once completed, the total cost for the project will be close to $7 million.

“The demand for new hangars is incredible,” added Moore County Airport Manager Scotty Malta. “We currently have over 40 customers waiting for hangars for their aircraft, and these new hangars only will accommodate maybe 25 of them. We continue to work hard to find solutions to make sure our pilots have the proper storage for their planes.”

An average 3600 square foot hangar can accommodate a single medium-size jet or up to three single-engine airplanes.

After completion, the Moore County Airport will dedicate the new hangar buildings in honor of Barry Lerman, former Vice-Chairman of the Airport Authority, who passed away earlier this year. Lerman was instrumental in getting the approvals and funding for the hangar expansion project.